1. The Genius of Marian
Anna Fitch & Banker White, Directors
USA, 2013 (PG)
English (86 min.)
Sunday February 1, 2:00PM
(PLEASE NOTE SPECIAL SCREENING LOCATION!!)
UK Albert B. Chandler Hospital's Pavilion A Auditorium
The Genius of Marian follows Pam White in the early stages of Alzheimer's disease. Her son, the film maker, works with her as she attempts to write a book that tributes her mother, the artist Marian Steele. As Pam's family comes together to support her, they must also prepare for the new reality that Alzheimer's brings. The film is a powerful work of art with many visual textures, interweaving observational film making with super 8 family movies, Marian's paintings and old photographs. The Genius of Marian is both an intimate look at a much feared illness and a loving portrait of the meaning of family.

2. Well Done Abba
Shyam Benegal, Director
India, 2009 (Not Rated)
Hindi w/subtitles (144 min.)
Thursday February 5, 7:00PM
Kentucky Theatre
Well Done Abba is a 2009 political satire Hindi film directed by Shyam Benegal, starring Boman Irani, Minissha Lamba and Sameer Dattani in pivotal roles. Mumbai-based businessman Rahul Singh decides to let go his chauffeur, Armaan Ali, who has returned to work after being absent unauthorizedly for about two months. Armaan pleads to reinstate him and offers to drive him to Pune, and the former wearily relents. It is during this journey that Armaan offers an explanation to his employer as to why he was absent from work - one to try and get his Chikatpally-based feisty daughter, Muskan, married; to drill a well on his property in this parched region where theft of water is common; comically try and stay below the poverty line in order to get benefits under the Kapildhara scheme; his arrest at the hands of the local police; his truant twin, Rehman; and the mysterious 'theft' of his well.

3. The Crash Reel
Lucy Walker, Director
USA, 2013 (Not Rated)
English (93 min.)
Saturday February 7, 10:00AM
(SATURDAY MORNING SCREENING TIME)
Kentucky Theatre
This eye-popping film seamlessly combines twenty years of stunning action footage with new specially-shot verité footage and interviews as it follows U.S. champion snowboarder Kevin Pearce and exposes the irresistible but potentially fatal appeal of extreme sports.
An escalating rivalry between Kevin and his nemesis Shaun White in the run-up to the 2010 Olympics leaves Shaun on top of the Olympic podium and Kevin in a coma following a training accident in Park City, Utah. Kevin's tight-knit Vermont family flies to his side and helps him rebuild his life as a brain injury survivor. But when he insists he wants to return to the sport he still loves, his family intervenes with his eloquent brother David speaking for all of them when he says, “I just don’t want you to die.” Kevin’s doctors caution him that even a small blow to the head could be enough to kill him. Will Kevin defy them and insist on pursuing his passion? With his now impaired skills, what other options does he have? How much risk is too much?
Directed by twice Oscar®-nominated filmmaker Lucy Walker (Devil’s Playground, Blindsight, Countdown to Zero, Waste Land, The Tsunami and the Cherry Blossom).

4. The Jewish Cardinal
Ilan Duran Cohen, Director
France, 2012 (Not Rated)
French w/subtitles (90 min.)
Thursday February 12, 7:00PM
Kentucky Theatre
The Jewish Cardinal tells the amazing true story of Jean-Marie Lustiger, the son of Polish-Jewish immigrants, who maintained his cultural identity as a Jew even after converting to Catholicism at a young age, and later joining the priesthood. Quickly rising within the ranks of the Church, Lustiger was appointed Archbishop of Paris by Pope Jean Paul II - and found a new platform to celebrate his dual identity as a Catholic Jew, earning him both friends and enemies from either group. When Carmelite nuns settle down to build a convent within the cursed walls of Auschwitz, Lustiger finds himself a mediator between the two communities - and may be forced at last to choose his side.

5. The Great Beauty
Paolo Sorrentino, Director
Italy, 2013 (PG-13)
Italian w/subtitles (142 min.)
Saturday February 14, 10:00AM
(SATURDAY MORNING SCREENING TIME)
Kentucky Theatre
Journalist Jep Gambardella has charmed and seduced his way through the lavish nightlife of Rome for decades. Since the legendary success of his one and only novel, he has been a permanent fixture in the city's literary and social circles, but when his sixty-fifth birthday coincides with a shock from the past, Jep finds himself unexpectedly taking stock of his life, turning his cutting wit on himself and his contemporaries, and looking past the extravagant nightclubs, parties, and cafés to find Rome in all its glory: a timeless landscape of absurd, exquisite beauty. The Great Beauty won Best Foreign Language Film at the 86th Academy Awards, as well as the Golden Globe and the BAFTA award in the same category.

6. A Fierce Green Fire
Mark Kitchell, Director
USA, 2012 (Not Rated)
English (101 min.)
Thursday February 19, 7:00PM
Kentucky Theatre
A FIERCE GREEN FIRE: The Battle for a Living Planet is the first big-picture exploration of the environmental movement – grassroots and global activism spanning fifty years from conservation to climate change. Directed and written by Mark Kitchell, Academy Award-nominated director of Berkeley in the Sixties, and narrated by Robert Redford, Ashley Judd, Van Jones, Isabel Allende and Meryl Streep, the film premiered at Sundance Film Festival 2012, has won acclaim at festivals around the world, and in 2013 begins theatrical release as well as educational distribution and use by environmental groups and grassroots activists.
Inspired by the book of the same name by Philip Shabecoff and informed by advisors like Edward O. Wilson, A Fierce Green Fire chronicles the largest movement of the 20th century and one of the keys to the 21st. It brings together all the major parts of environmentalism and connects them. It focuses on activism, people fighting to save their homes, their lives, the future – and succeeding against all odds.

7. The Good Lie
Philippe Falardeau, Director
USA, 2014 (PG-13)
English (110 min.)
Saturday February 21, 10:00AM
(SATURDAY MORNING SCREENING TIME)
Kentucky Theatre
They were known simply as “The Lost Boys.”
Orphaned by the brutal Civil war in Sudan that began in 1983, these young victims traveled as many as a thousand miles on foot in search of safety. Fifteen years later, a humanitarian effort would bring 3600 lost boys and girls to America.
In The Good Lie Philippe Falardeau, (writer and director of the Oscar®-nominated Foreign Language film “Monsieur Lazhar”) brings the story of their survival and triumph to life. Academy Award® winner Reese Witherspoon (Walk the Line) stars alongside Sudanese actors Arnold Oceng, Ger Duany, Emmanuel Jal, and newcomer Nyakuoth Weil, many of whom were also children of war.

8. Human Capital
Paolo Virzì, Director
Italy, 2013 (Not Rated)
Italian w/subtitles (109 min.)
Thursday February 26, 7:00PM
Kentucky Theatre
Human Capital begins at the end, as a cyclist is run off the road by a careening SUV the night before Christmas Eve. As details emerge of the events leading up to the accident, the lives of the well-to-do Bernaschi family, privileged and detached, will intertwine with the Ossolas, struggling to keep their comfortable middle-class life, in ways neither could have expected. Dino Ossola (Fabrizio Bentivoglio), in dire financial straits, anticipates the birth of twins with his second wife (Valeria Golino). Meanwhile, Dino's teenage daughter's relationship with hedge-fund manager Giovanni Bernaschi's playboy son complicates an already tricky social dance of status, money and ambition. Paolo Virzi's taut character study deconstructs the typical linear narrative, observing transformative events from each character's perspective. The result is a nuanced account of desire, greed and the value of human life in an age of rampant capitalism and financial manipulation.

9. Fed Up
Stephanie Soechtig, Director
USA, 2014 (PG)
English (92 min.)
Saturday February 28, 10:00AM
(SATURDAY MORNING SCREENING TIME)
Kentucky Theatre
Fed Up shows how the first dietary guidelines issued by the U.S. government 30 years ago overlooked the role of dietary sugar in increasing risks of obesity, diabetes, and associated ill-health outcomes, particularly in children. Since these guidelines effectively condoned unlimited addition of sugar to foods consumed by children, sugar consumption has greatly increased, obesity has skyrocketed, and generations of children have grown up far fatter than their parents. These children face impaired health and shorter lifespans as a result. As the relationship between the high-sugar diet and poor health has emerged, entrenched sugar industry interests with almost unlimited financial lobbying resources have beaten back attempts by parents, schools, states, and in Congress to provide a healthier diet for children.

10. Anita
Freida Lee Mock, Director
USA, 2013 (PG)
English (95 min.)
Thursday March 5, 7:00PM
Kentucky Theatre
An entire country watched transfixed as a poised, beautiful African-American woman in a blue dress sat before a Senate committee of 14 white men and with a clear, unwavering voice recounted the repeated acts of sexual harassment she had endured while working with U.S. Supreme Court nominee Clarence Thomas. That October day in 1991 Anita Hill, a bookish law professor from Oklahoma, was thrust onto the world stage and instantly became a celebrated, hated, venerated, and divisive figure.
Anita Hill’s graphic testimony was a turning point for gender equality in the U.S. and ignited a political firestorm about sexual misconduct and power in the workplace that resonates still today. She has become an American icon, empowering millions of women and men around the world to stand up for equality and justice.

11. Selma: The Bridge to the Ballot
A Film from The Southern Poverty Law Center
USA, 2015 (Not Rated)
English (40 min.)
Saturday March 7, 10:00AM
(SATURDAY MORNING SCREENING TIME)
Kentucky Theatre
On March 7, 1956, 600 civil rights activists left Selma, Alabama, on foot, marching for dignity and equality. 18 days, 54 miles, 1 police attack, 1,900 National Guard troops, 2,000 U.S. Army soldiers and countless stories later, they arrived in Montgomery 25,000 strong — and changed history.
Selma: The Bridge to the Ballot tells the story of a courageous group of students and teachers who, along with other activists, fought a nonviolent battle to win voting rights for African Americans in the South. Standing in their way: a century of Jim Crow, a resistant and segregationist state, and a federal government slow to fully embrace equality. By organizing and marching bravely in the face of intimidation, violence, arrest and even murder, these change-makers achieved one of the most significant victories of the civil rights era. 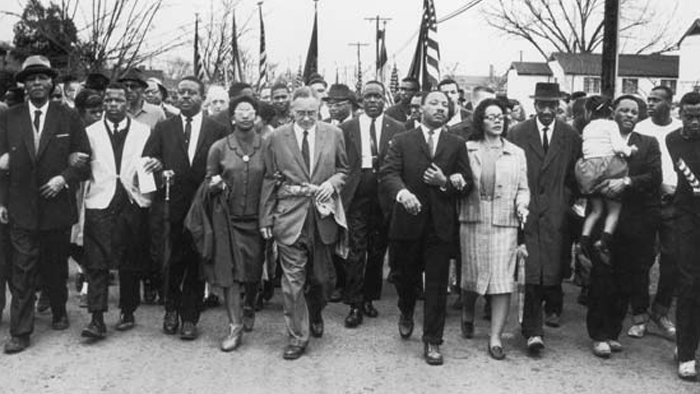